Jindo, South Korea (CNN) — South Korean President Park Geun-hye on Monday likened the actions of the captain and some crew members of the sunken ferry Sewol to murder, as police made more four arrests and divers continued searching the submerged vessel.

The captain of the South Korean ship, Lee Joon-seok, is already facing a series of criminal charges for his role in last week’s sinking, in which at least 65 people have died and 237 others remain missing. Many of them are students and teachers on a field trip from a high school near Seoul.

“The actions of the captain and some of the crew are absolutely unacceptable, unforgivable actions that are akin to murder,” Park said Monday in comments released by her office. She said she and other South Koreans were filled with “rage and horror.”

The latest arrests of crew members bring the total number detained to seven as authorities investigate what went wrong on the ship as it sailed toward a popular holiday island.

Why did the captain abandon ship? 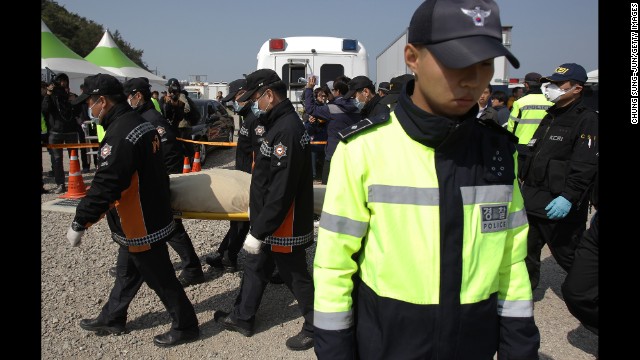 Park’s strong words come after more details emerged over the weekend about the chaos and confusion aboard the doomed ferry as the disaster unfolded in the cold waters of the Yellow Sea off South Korea’s southwest coast.

A radio transcript released by authorities suggested that passengers on the ship couldn’t reach lifeboats to escape because the ship tilted so quickly that it left many of them unable to move.

“Please notify the coast guard. Our ship is in danger. The ship is rolling right now,” a crew member on the ship first tells authorities in a fraught conversation that took place as the Sewol ferry was foundering.

When one of the centers advises getting people into life vests, the crew member replies that it’s “hard for people to move.”

After the conversation switches to the other center, the crew member says the ship has leaned so far that passengers are unable to move.

“Are the passengers able to escape?” the center asks.

“The ship listed too much, so it is impossible,” the crew member replies.

The center also urged the captain to take charge of the crisis.

“The captain should make (the) decision to make people escape,” it told the ferry, noting that he had a better understanding of the situation.

Capt. Lee has defended his order to delay the evacuation of the ferry.

“It is a fairly fast current area, and the water temperature was cold,” he said over the weekend, according to CNN affiliate YTN.

“I thought that abandoning the ship without discretion would make you drift off a fairly far distance and cause a lot of trouble. At the same time, the rescue ship did not come, and there were no fishing boats or supporting ships around to help at that time.”

Could moving the ship hurt survivors?

But the first mate of a boat that responded to the Sewol’s emergency call disagreed.

“If the passengers had jumped into the water sooner, more people could have been rescued,” Eun Dae-young told CNN affiliate YTN in a phone interview Monday.

The ferry captain has been charged with abandoning his boat, negligence, causing bodily injury, not seeking rescue from other ships and violating “seamen’s law,” South Korean media reported.

Prosecutor Lee Bong-chang gave more details about the accusations against the captain.

“Mr. Lee is charged with causing the Sewol ship to sink by failing to slow down while sailing the narrow route and making (a) turn excessively,” the prosecutor told the semiofficial Yonhap news agency.

“Lee is also charged with failing to do the right thing to guide the passengers to escape and thereby leading to their death or injury.”

If convicted, the captain faces from five years to life in prison.

The captain wasn’t at the helm of the Sewol when it started to sink, the prosecutor said. A third mate was at the helm.

Authorities said Monday that four more crew members of the ferry have been detained, bringing the total number arrested to seven.

Two first helmsmen, one second helmsman and the chief engineer are now under arrest, said Yang Joong-jin, the chief prosecutor of the investigation. He said the four crew members could face indictment on several charges.

As well as the captain, two other crew members were arrested over the weekend.

At least 64 people have died in the sinking, and 238 are missing, the South Korean coast guard said Monday.

Although 174 people were rescued soon after the vessel sank Wednesday, no survivors have been found since.

After divers found a way into the submerged ship, search crews have been bringing ashore body after body.

They are carried onto the dock one by one, tied up in identical white bags.

Family members of the missing passengers wait anxiously, bracing themselves.

The bodies are put on a stretcher, draped with a blanket and taken up a gravel path.

Identification takes place inside white domed tents from which the howls of grief-stricken parents escape.

Some of the police officers standing guard outside wipe away tears.

With hundreds of people still missing, the grim process is likely to be repeated again and again.

Dozens of divers have continued to plunge into the frigid, murky waters, still holding out hope that they might find somebody alive inside the sunken ship.

“There must be survivors, no matter what we must find the air pocket. That’s why I have hope,” Choung Dong-nam, the head of volunteer divers involved in the search, said Sunday.

But each hour reduces the chances of finding anyone alive, and the human cost of the disaster weighs on the divers.

“We cry everyday and search for the missing people,” Choung said. “I cry whenever I think about it.”

Divers were expected Monday to try to enter the ship’s cafeteria, where authorities believe most students were when the ship started to sink, officials said.

Their task is made severely challenging by the poor visibility.

The divers are using guidelines to navigate their way around

Where was the captain?

As the search goes on, the actions of the captain and crew remain under scrutiny.

The captain was not in the steering room when the accident took place, according to police and his own account.

He said he plotted the ship’s course, and then went to his cabin briefly “to tend to something.” It was then, the captain said, that the accident happened.

A crew member, described as the third mate and identified only as Park, appeared in handcuffs with Capt. Lee at the weekend.

The third mate said she did not make a sharp turn, but “the steering turned much more than usual.”

The captain and the third mate both apologized to the bereaved families.

Park is facing charges including negligence and causing injuries leading to deaths, authorities said. A technician with the surname Cho is also facing the same charges, they said.

The captain was one those rescued soon after the Sewol began to sink, violating an “internationally recognized rule that a captain must stay on the vessel,” maritime law attorney Jack Hickey said.

“Pretty much every law, rule, regulation and standard throughout the world says that yes, the captain must stay with the ship until all personnel are safely off of the ship, certainly passengers.”